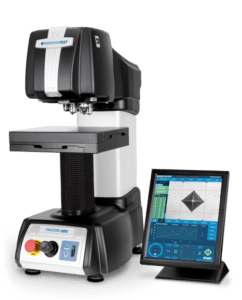 Hardness test focuses on the capacity of an object to resist the infiltration of another object with a certain degree of resistance. The minimal the damage caused, the harder the object appears. Human hands can sense the hardness of materials. However, only soft objects can be assessed their hardness by fingers. The testing of technically much harder materials is only possible by the use of testing apparatus.

The test for hardness of objects is of tremendous importance for quality assurance in industries. The most common methods used are, Rockwell, Vickers, Brinell and Knoop.

Rockwell test is the most widely used method of hardness testing. This test is popular as it takes the least time to execute, the machine is affordable and the procedure can be automated.

According to the Vickers test, the hardness of an object is an issue of principle independent of the selected test force. With this procedure, there is only a slight indentation of the test sample and applies to very small test forces.

The Brinell method is suitable for testing soft metals and hardened steel. Unlike the Rockwell test, it has relatively high testing expenditure and allows for a test of inhomogeneous materials.

The Knoop method is rarely applied and is similar to the Vickers procedure. It is however suitable for testing of very hard and brittle materials which if the Vickers method was used would lead to cracks on the indentation.

We use cookies on our website to give you the most relevant experience by remembering your preferences and repeat visits. By clicking “Accept”, you consent to the use of ALL the cookies.
Cookie settingsACCEPT
Manage consent

This website uses cookies to improve your experience while you navigate through the website. Out of these, the cookies that are categorized as necessary are stored on your browser as they are essential for the working of basic functionalities of the website. We also use third-party cookies that help us analyze and understand how you use this website. These cookies will be stored in your browser only with your consent. You also have the option to opt-out of these cookies. But opting out of some of these cookies may affect your browsing experience.
Necessary Always Enabled
Necessary cookies are absolutely essential for the website to function properly. These cookies ensure basic functionalities and security features of the website, anonymously.
Functional
Functional cookies help to perform certain functionalities like sharing the content of the website on social media platforms, collect feedbacks, and other third-party features.
Performance
Performance cookies are used to understand and analyze the key performance indexes of the website which helps in delivering a better user experience for the visitors.
Analytics
Analytical cookies are used to understand how visitors interact with the website. These cookies help provide information on metrics the number of visitors, bounce rate, traffic source, etc.
Advertisement
Advertisement cookies are used to provide visitors with relevant ads and marketing campaigns. These cookies track visitors across websites and collect information to provide customized ads.
Others
Other uncategorized cookies are those that are being analyzed and have not been classified into a category as yet.
SAVE & ACCEPT